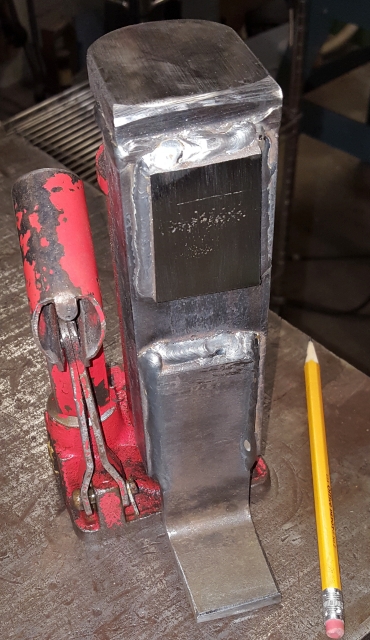 I designed a toe jack for lifting heavy machine tools a short distance off the ground. This toe jack is different from most commercial toe jacks. The toe of a toe jack has to be able to slide underneath a machine sitting on the ground. If you are familiar with a Bridgeport mill, those have a notch in the center of the front and back of the machine base. Those notches are only a couple inches wide. So my toe protrudes in front of the jack base, unlike the commercial jacks. Here is an example of a commercial jack. Note the feet on either side of the tongue. Even though the yellow toe jack was professionally designed and heavily built for extreme strength, it would be no use in lifting a mill or a lathe. 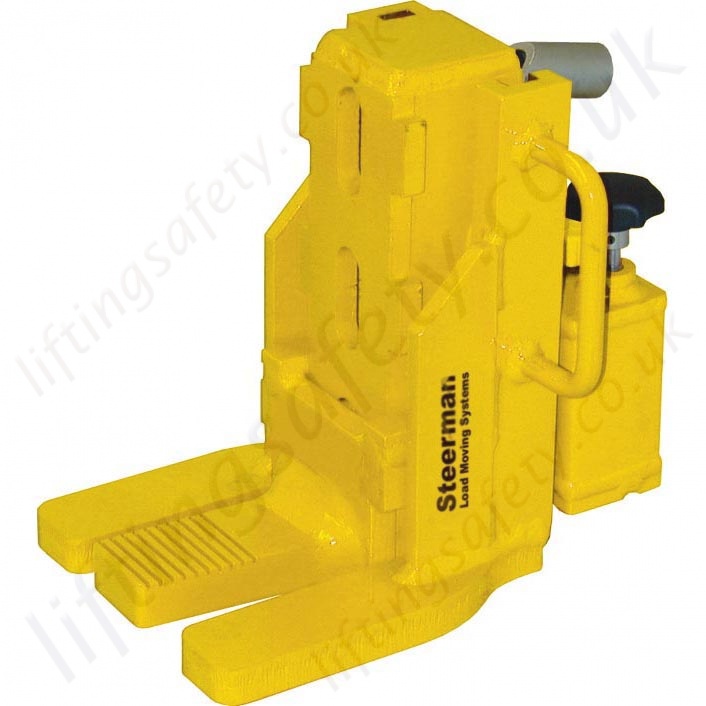 Here is a link to a picture which shows such a notch: 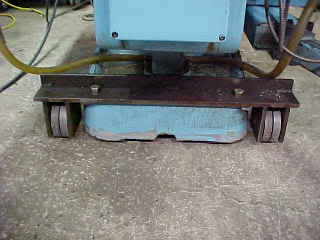 If you look again at my design (above, at the top), you see how the tongue can fit under a machine since there are no feet to interfere. It does look like a weight on the tongue would want to push the bottom of the channel hard against the cylinder. This brings me to the second design feature I came up with - a way for the base of the toe jack attachment to slide right up the jack's cylinder. I did this by using light steel channel. Welded into the bottom 2-1/2" of the channel are two pieces of 1/4x1" flat bar to form a 90 degree vee block. The cylinder body is supported from the side by the vee block. Here is a picture of my attachment showing the vee block: 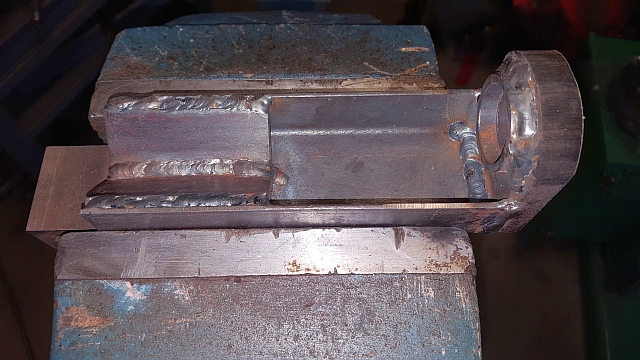 If you look at this last image, the first thing you can see is how the channel is oriented. It essentially acts as its own gussets to support the critical joint between the ram plate and the channel. You can also see the piece of 1" pipe welded to the underside of the ram plate. This is another key design feature - I can just lift this attachment off of my bottle jack. It isn't attached in any way except by gravity. The bottle jack only touches the toe jack attachment on the end of the jack's ram, and the side of the body bears on the vee block.

The tongue, the part that actually lifts the machine, is just a piece of 1/4" thick angle solidly welded on its long vertical leg to the channel: 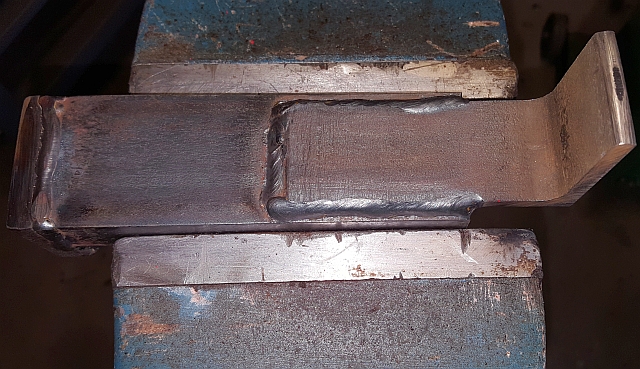 The last design goal of mine was to make a small light duty weldment. I did no engineering of any kind, but I have seen other guys massively overbuild these things. The channel I used is only 2" wide and less than an inch tall and isn't quite 1/8" thick anywhere. Yet I believe this flimsy-looking design is actually strong enough to lift a ton or more. At any rate, in the above picture the attachment is held in a vise with 6" jaws, so you can see it's just a little thing.

Getting back to the vee block, here is how I fit the vee together: 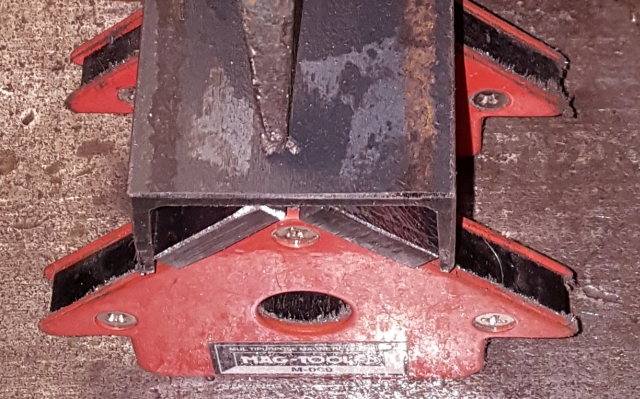 As you can see, the use of the welding magnetic squares ensure the vee is very close to an actual 90 degrees. As a side note, if you need a rough vee block for welding, the above method makes a fairly useful one. Anyway, all I did to the part as shown above was put one tack weld which held both vee plates in place. Then I removed the magnetic squares, turned the part over and welded the vee plates in solidly. Not my prettiest welds, but they should be strong enough. In fact, nothing about this project is pretty or glamorous. I took a super cheap 4 ton bottle jack for which I paid $2 at a yard sale, and welded up a few cents worth of steel bits and pieces to make my attachment. It went together in one morning, including design time.

Here is the attachment sitting on my scale, weighing in under 3 pounds. 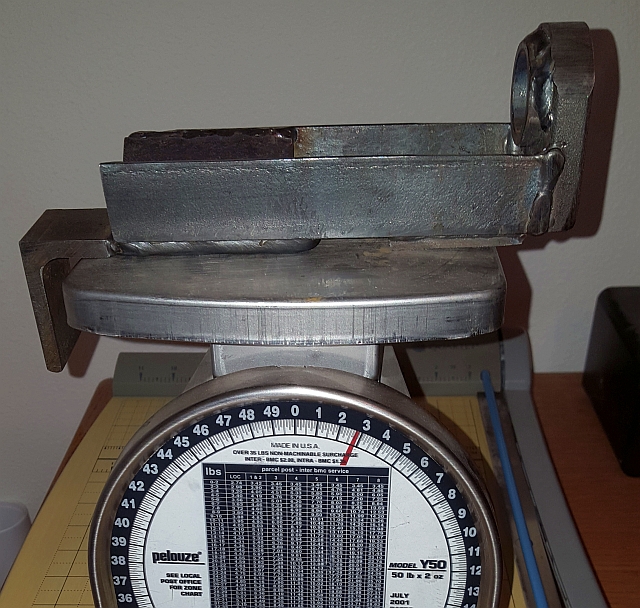 So how des it work? This type of "footless" jack wants to tip towards the load, so you have to put a spacer block between the load and the top of the channel. When I do that, the machine just lifts right up. Here's a picture of the machine lifting my 12" shaper a couple of inches: 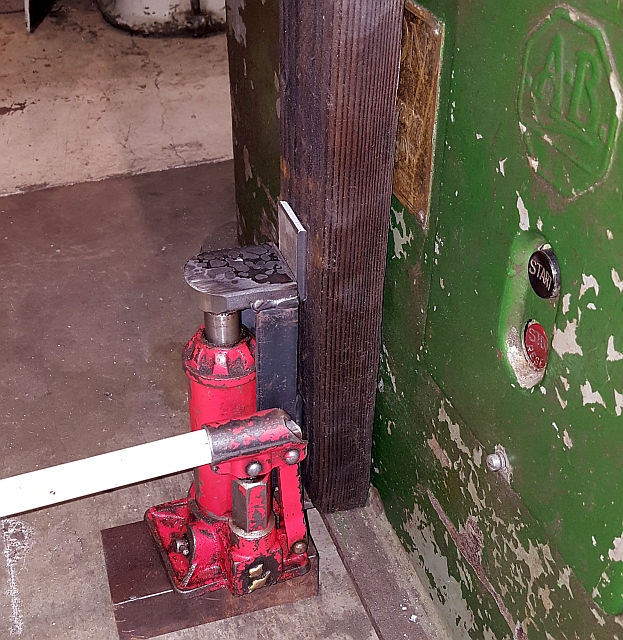 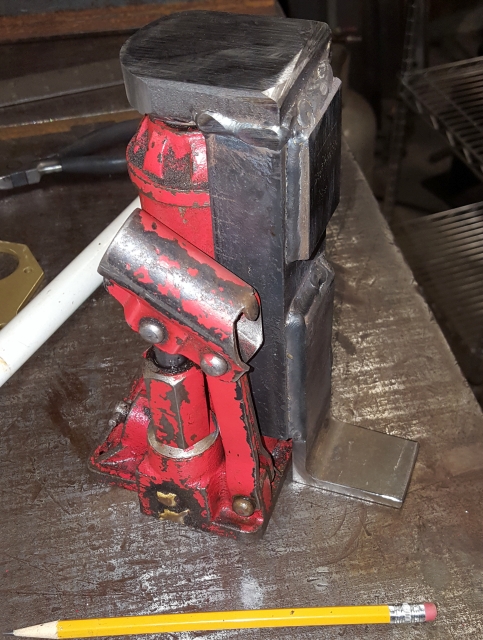 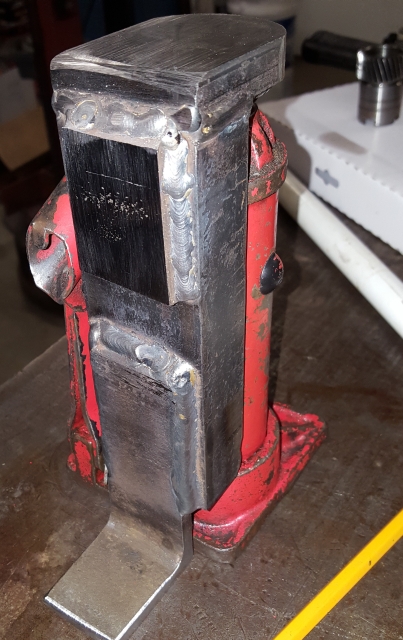 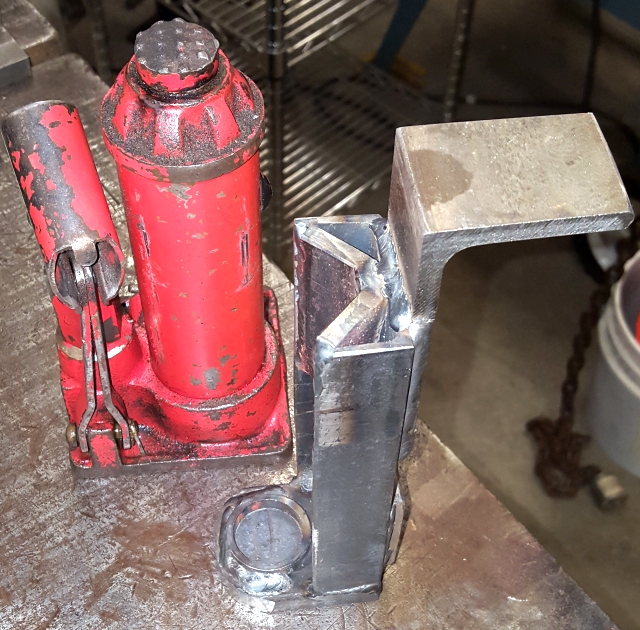 I rather suspect that this attachment won't do the red paint on the bottle jack much good. But then it's already totally ratty looking, so there isn't a lot to lose!

UPDATE: My buddy prevailed upon me to make another one. I thought I'd post a picture of the seven simple parts: 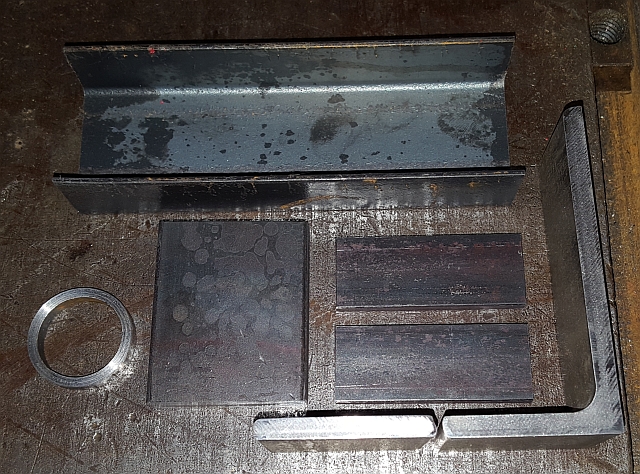 And that's the end of this little project for now. I'll update this page later as I use this toe jack to actually lift machines. So check back periodically.