I have been welding since I was a teenager, doing it seriously at home since the early '80s. I have been getting by for many years with a piece of 3/8" plate sized 28x30" on a base salvaged from a local welding school, where it used to hold up a rod oven. Recently, though, a buddy let me know that he was selling a table with a cast iron top with tee slots. The top had once been planed flat. The table was sitting out in the weather and obviously needed a fair amount of work. I thought about it for awhile and made him an offer. He thought about it for awhile and then accepted. The deal struck, I procrastinated for awhile and then hauled my trailer down and brought this table home. 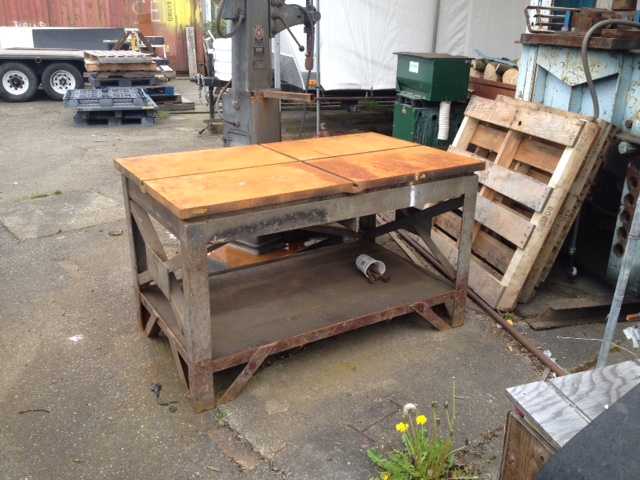 It's quite stout. The top is 2" thick at the edges and gets quite a bit thicker in the middle. I did a bit of volume calculating and now I estimate the top weighs about 1500 pounds. The table frame is built very heavily. Much of it is made from 3x3x1/2" angle. I figure it weighs around 500 pounds. All in all, about a ton. I was glad I had a gantry to unload it. The unload went fine. I used a portapower to break the top loose from the frame (it just sits down in the frame like soap in a soap dish) and then picked up the top and drove the trailer out from under it. I moved the hook all the way to one side of the gantry and set the top down on some 4x4s. I left it to work on later - it was the table frame that needed a lot of work. Here's what the top looked like at that point: 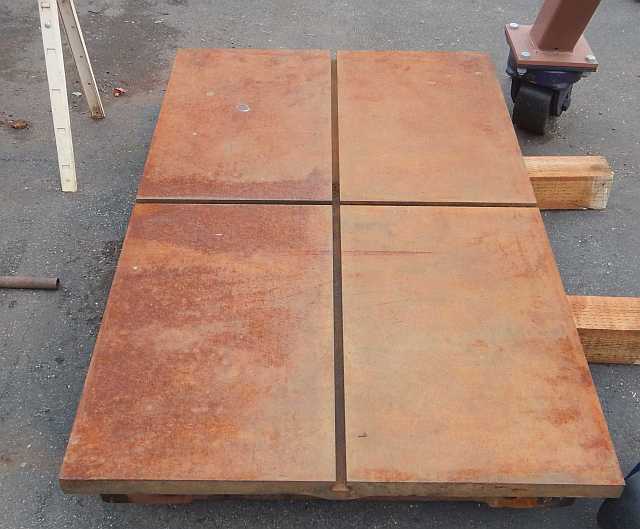 And here's what the table frame looked like after I unloaded it: 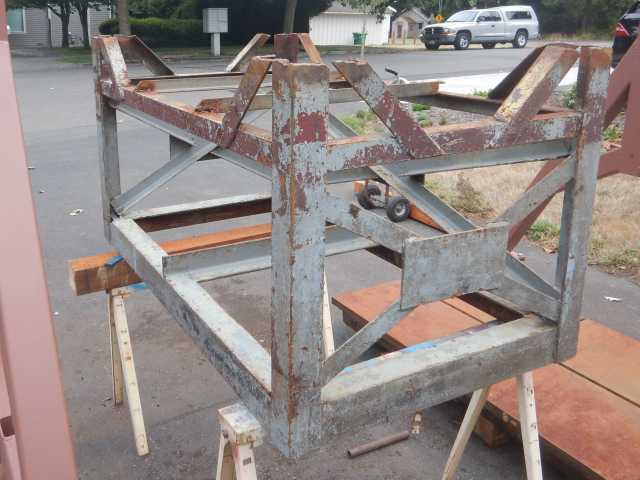 As you see, the bottom of the table frame had been crudely hacked off with a cutting torch, leaving a lot of gnarly stubs. My first job was to get out my torch and put on a flushing tip and get all of those stubs off of there, grinding the leftovers. Ugh, nasty job.

In my shop my policy is everything possible should be mounted on wheels. I knew I wanted this table to be on casters. After all, if I didn't put casters on it, I didn't have any way to move it into my shop! I prevailed on another buddy to sell me a set of once-Boeing-Surplus 4x8" casters. These casters are very robust indeed. Each wheel is rated for 3500 pounds. Anyway, I bought a set of 4 and hauled them home.

Next, I made some caster plates from 1/2" steel. I cut them out oversize using a plasma cutter and clamped straightedge. Then I put them on the shaper and machined them square and to size. It was my first time trying to machine a HAZ on alloy steel (A514) with a HSS bit. I'd heard a lot of horror stories. I was able to make it work fine, though. I just had to sharpen my bit a few times, that's all. Here is the torch-cut plate before machining:

And here's what it looked like after machining. (Note: there is a big burr along the lower edge of the plate, that's why it doesn't look clean.) Looks a lot better, eh?

I did my layout and drilled the 11/16" holes in the plates using a mag drill. That was straightforward and uneventful. Next I cleaned up the caster plates and welded them to the table frame. While the table was still upside down I painted the bottom. I used dark blue Hammerite because I had a quart can that needed to get used up.

After the paint dried on the bottom of the table frame, I picked it up in the air, flipping it right side up, using the gantry hook. Then I used a lift table to lift each 70 lb. caster up under its plate and was able to maneuver the heavy caster to get them bolted on. After that, I set it down and rolled it inside to finish welding the caster plates. I did it inside because the weather was changing and I was really fighting the wind with my MIG welder.

After I got the caster plates fully welded, I made up some angle iron clips with bolt holes, and welded them in place so I could add pieces of strut to the back and sides of the table. These were so I could mount electrical boxes and ultimately put four 20 amp outlets on each end of the table. Always need 120V outlets around a welding table!

Then came painting day. I brushed some and rolled the rest. Rolling went about 20 times faster than brushing. Then I let the paint dry for a couple of days. During that time I mounted the electrical parts and also put the wooden lower shelf boards back in. Although they're filthy, they are made of oak and are very strong and certainly still usable. And this table will only stay shiny for a day or two in a weld shop anyway.

Here are a couple of shots of the completed table frame: 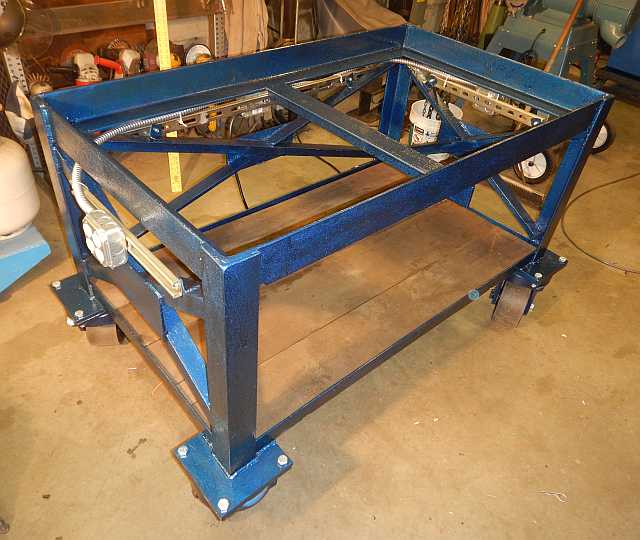 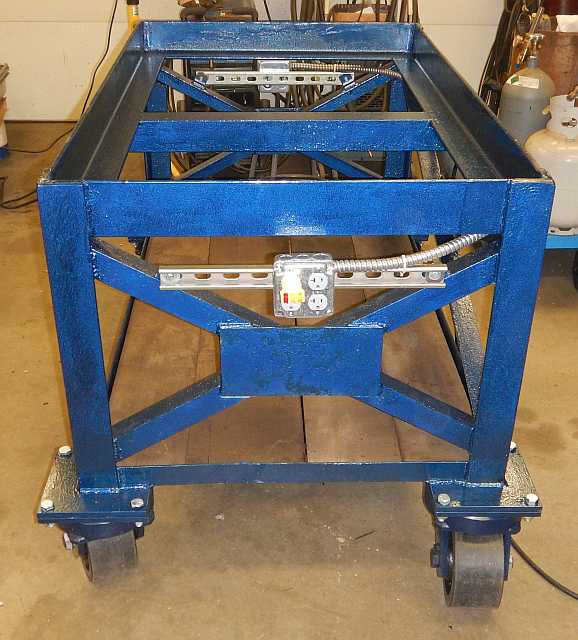 In the second picture there is a circuit tester in one of the outlets. I wanted to show the two yellow LEDs that say it's wired correctly, but they didn't come out in the picture.

Then, finally, I got to roll the table frame back outside and put the top on it and roll it back in. As is often the case here in Seattle, it was raining, but not too hard so the table frame didn't get too wet. The table rolled easily but steering was hard. I had to use a big wrench to straighten out casters a couple of times. Anyway, in it came. Then I blew off the top (dripping wet) and began to attack the rust.

The first step was an angle grinder with a fine cup wire wheel on it. It was great to simply plug it into the table! I knocked off the heavy rust, choke, gag. (Actually, I wore a cartridge respirator.) Next, I used a random orbital sander with brown 3M pad mounted. I sprayed kerosene on for a cutting fluid. Don't know if it was the best, but it worked. Then I cleaned off the sludge using rags and mineral spirits. Once most of the oxidation was gone, I could see that the table had seen some hard service. There were tons of dings, dents and furrows. Again, I used kerosene as a cutting fluid as I spent about 2 hours stoning the table. The dings are still there but now it's much flatter. And, now I could see the original planing marks! Have a look: 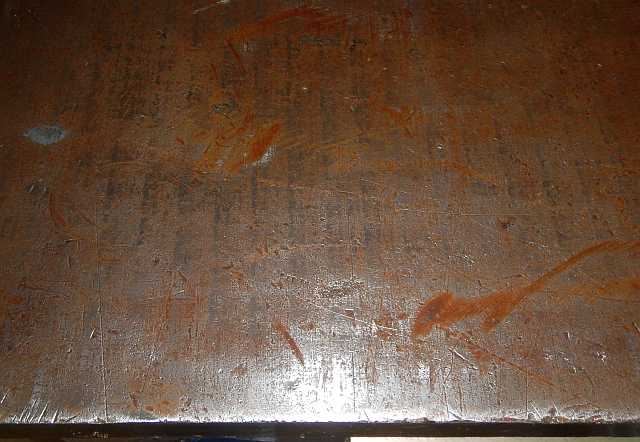 It doesn't look like a new table saw, but it sure is a whole lot flatter than my old piece of 3/8" plate. Anyway, I couldn't find my Boeshield T-9 (grr..) so I just cleaned it all up and called it good. Here are a few pictures: 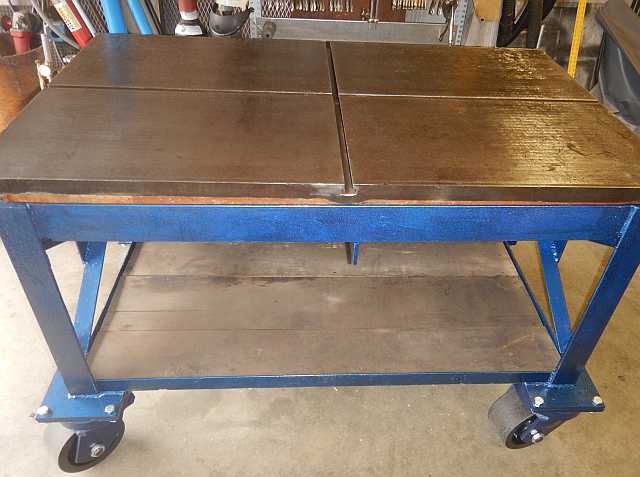 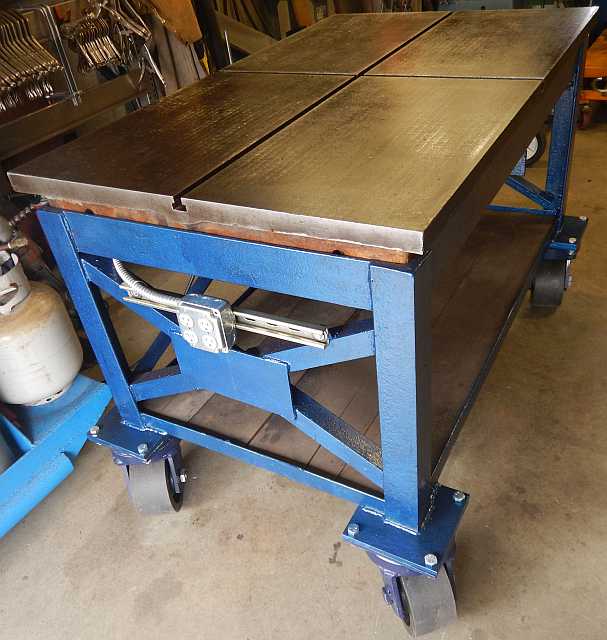 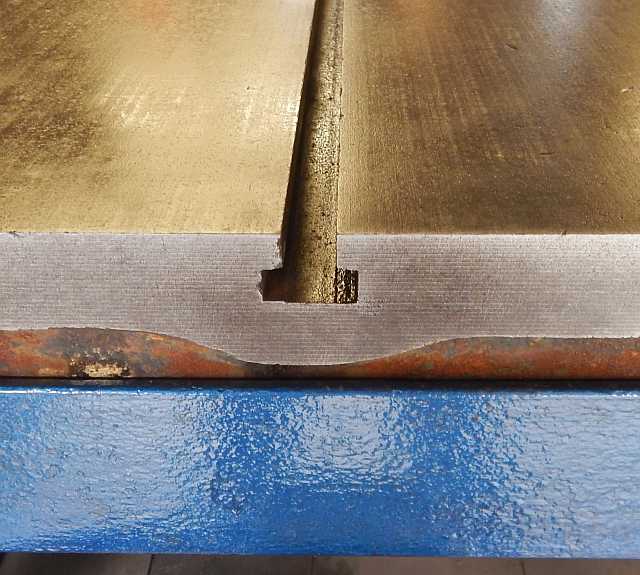 So that's it! My new welding table, complete with casters, new paint and 117V 20 amp outlets.